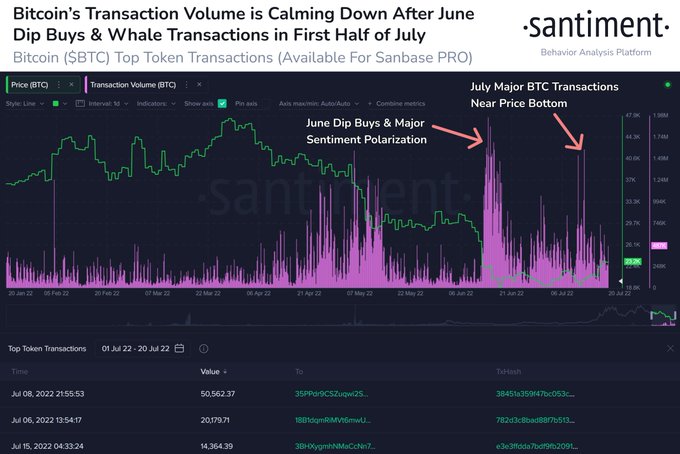 The leading cryptocurrency recently dipped to lows of $17K, which contributed to the dwindling transaction volume.

Nevertheless, BTC has regained momentum and breached the $22K, with its price hovering around $22,900 during intraday trading, according to CoinMarketCap.

Market analyst Michael van de Poppe also believes Bitcoin might be staring at the bottom, given that the uncertainty surrounding various crypto lending platforms like Celsius and Voyager has triggered the crash. He pointed out:

“So, not only forced selling from 3AC, LUNA & UST, but also Voyager, BlockFi and Celsius have been causing the markets to crash. On top of that, Tesla did sell 75% of their Bitcoin purchases towards cash. That’s what caused the crash. That’s also why we’re close to the bottom.”

Electric car manufacturer Tesla revealed that it sold $936 million worth of Bitcoin, or 75% of its holdings in the second quarter, symbolising a change of tune, given that the company’s CEO, Elon Musk, has been a notable crypto advocate.

On the other hand, crypto analyst Ali Martinez stipulated that caution should not be thrown to the wind in the BTC market and said:

“Approach Bitcoin with caution. The TD Sequential presents a sell signal on BTC four-hour chart. A sustained four-hour candlestick close below $23,600 can trigger a correction for BTC to $22,500 or even $21,670.”

Mike McGlone, a Bloomberg Intelligence strategist, recently stated that the upcoming interest rate increase by the Federal Reserve might be a drawback to Bitcoin’s rally.

What is the best NFT platform for selling crypto art?

What goes into choosing a consensus mechanism

🔴Is Coinbase in Trouble?